The 12th Player organisation was founded in 2000 by a number of supporters from Gate 11, in aim to change Maccabi's crowd and turn it to a more supporting, loud and organised one – understanding that a better crowd shall push Maccabi Tel-Aviv forward.

The people who founded the 12 Player organisation were tired with the state of the Maccabi support these days. A state which included all common stigmas about Maccabi's following, about a spoilt crowd who supports only a winning side, a crowd displaying no tifo nor using many supporting materials (such as flags, banners, etc.), a crowd never singing during all 90 minutes (even while winning), a crowd lacking a variety of creative songs and chants.

One of the matches that showed such strong need for a change in the Maccabi support was against Maccabi Haifa in the 2nd of October 2000.
The fans, before the match was still cheering for the players, "flipped sides" after 67 minutes with Haifa leading 3-0, and the game had to be stopped for a few minutes because of crowd disorder and throwing of various objects into the field (preventing Haifa from taking a corner kick next to Gate 11), while "resign!" and "disgrace!" calls toward the coach and players are heard in the background.
Following this match – the 12th Player organisation was founded.

The vision was an establishment of a colourful passionate group, fanatically chanting and supporting the team everywhere, with no regards to the score on the field, with the object of changing Maccabi's crowd from a spoilt crowd to a crowd chanting and supporting the team even in difficult times.
Soon about 20 fans of different ages started working in order to endow the principles and ideology of the 12th Player organisation among the yellow-blue crowd, and the change did soon come – even in that same 2000/2001 season the crowd looked totally different.

The 12th Player is and organisation espousing the idea of chanting 90 minutes long, regadless of the score.
We believe that support coming from the stands during difficult times will help the team more than angry and insulting comments, and will better help the team and players achieving more (a thing which proved true with time). This is one of the principled and goals we set for ourselves in the beginning of our way.
The target of the 12th Player is turning Maccabi into a rank B team in Europe, with the organisaion's activities attracting fans to the stadium, thus providing better income and giving Maccabi the financial support needed for competing in higher levels.
The 12th Player believes in collaborating with the club's managent, but still to knows to confront the higher ranks when not being respected or taken for granted, with the board hurting such fan rights as: price tickets, police attitude following club owners' requests, etc. 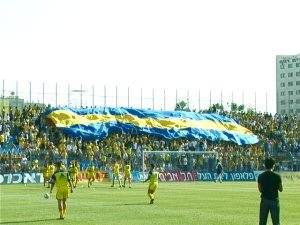 Since 2000 to these days, the 12th Player is responsible for tifos choreographies and leads the chanting in support in the stands, succeeding in endowing the organisations' ideology among Maccabi Tel-Aviv fans, turning our support to a supporting, loving and colourful crowd.
During this period of time, the 12th Player improved the level of choreos in the stadium, making lots of banners, flags etc.
The organisation also improved the level of fan songs, with many new songs introduced, songs for each player, the team and the crest.

The 12th Player is not responsible for choreos only, but arranges buses for away matches, selling yellow-blue merchandise for fans (all income used for buying tifo material), arranging activities for forging the spirit of "togetherness" in the yellow-blue crowd such as an open football tournament named after Yarden Nagar RIP (a devoted fan and 12th Player member killed in a road accident) once in a year in Kiryat-Shalom, fan parties, screenings of matches abroad, and running this website which together with our forums provide a virtual home for fellow Maccabi fans.

Even though the 12th Player was founded in order to improve and support the club's football section, we don't see ourselves as "football fans" but as Maccabi fans – the organisation supports the club's basketball, volleyball and handball teams as well, supporting every section of Maccabi Tel-Aviv club.
This is especially noticeable in Maccabi's volleyball and handball matches – with the peak of the phenomena in the 2007/8 season, as the deciding match for the Israeli volleyball championship saw a bumper crowd of 1500 fans (unusal for this sport in Israel) encouraging our players to win its first title in 11 years.

The 12th Player organisation is not only a tifo, support and fan rights organistaion, but is a family.
The organisation members have meeting once a while and enjoy a friendly and family-like atmosphere.

Our brotherhood with the Ajax fans began in the summer of 2002, after a friendship began to develop between several members of the 12th player and a couple of people from VAK 410, all sharing the love for Maccabi, Ajax and of course Israel. It didn't take long until banners and scarves were being replaced between the guys and an article about the 12th player was written in an Ajax's fanzine. Shortly afterwards, the brotherhood began spreading to everyone in gate 11, and memeber of SUB 11 started talking to the dutch fellows.
In the summer of 2003, Maccabi had a pre-season camp in Holland, Ajax fans went over and cheered for Maccabi. That same summer, Maccabi's arch rival – Hapoel, played against the Turkish team, Gazyantepspor in the UEFA cup in holland. Several Ajax fans made the journey and came to Rotterdam to root for Gazyantep.
In the middle of the 2003-2004 season, an Ajax fan came over to Israel and was staying at our houses, coming with us to everyplace we went, including matches.
During the season, Ajax fans had a tournament of their own, and our friends decided on using the 12'th player's symbol, and call their team "AFCA MACCABI".

The brotherhood reached it's peak during the 2004-2005 season, after Maccabi Qualified for the first time to the group stage of the CL. Maccabi had Bayren, Juventus and AJAX in the same group. The first match took place in Amsterdam, which means that 2000 Maccabi fans made the trip to Holland, 40 of them being members of SUB 11 and The 12th Player stayed at Ajax fans' houses, most of them from VAK 410. During the trip the fans exchanged flags, banners and scarves, talked about stuff they had on games and brought up suggestions on how to make the cheering better.

At the same time we also stayed at Ajax's fanclub, where we learned Ajax songs and vice versa. On Matchday we had a little parade at the Amsterdam streets, and a member of SUB11 even got in the early entrance to help. During the game, we could spot a banner from Vak 410 reading "Hapoel Zona" (Hapoel's a whore), a banner which they made for the game, while at the very same time, a banner mocking Feyenoord was hung in our gate. In addition, they made banners reading "The 12th player & AFCA". We made a banner reading "Brothers" with both symbols on the sides. 2 weeks later, Ajax arrived in Israel to play here, and Ajax fans arrived a week earlier, staying at members of the 12th player and Sub11 homes. The dutch came to the game between Maccabi and Beitar and against Haifa.
On Matchday, fans from both sides got together outside of the stadium and hung brotherhood banners inside the stadium. A few of the Ajax fans, stayed after the match between the 2 teams for our derby.
In the summer of 2005, approaching the 2005-2006 season, Maccabi had their pre-season training camp as usual, in Holland and got a wonderful round of applause from Ajax fans using flags, drums, pyros etc…
This only made the bond stronger and Maccabi players excited yet surprised. The brotherhood continued during the 2005-2006 season, while the Sub11 members made a banner that is shown in every game. Approaching the end of the season, Vak 410 people returned the favor and made one of their own about Vak 410 and Sub11. Merchandise was sent from Holland to Israel and vice versa.
A few of the 12th Player members also flew to Holland and went to the game between Ajax and PSV, where they hung a banner of the 12th player there. During the 3rd derby, Ajax fans hung a banner against Alkmaar with Maccabi's symbol to show their wishes for a win in the derby.
The best moment came when Maccabi's star and captain Avi Nimni had a birthday, Ajax fans (Vak410) made a banner in Hebrew (!!!) that said "Avi Nimni the King, Happy Birthday". They were also pictured with the banner at the DAMM square.

During Maccabi's pre-season training camp of summer 2006, continued our Dutch friends at their supporting tradition and like every other year, came to the camp while cheering for the players. At maccabi's match against Dan Helder, they even had a fight with local fans, due to wavings of Paestine's flags and shouting against Israel by the last ones.
At the begining of 2006/7 season, the 12th player made a poster with VAK 410 and the 12th players' symbols, and the word 'Brothers' written on it. That poster was hanged during Maccabi's home games.
Just before the first derbi match of 2006/7 season (which ended with Maccabi winning 3:1) came some VAK 410 members to the match, and were welcomed as guests by Maccabi's fans. As this season continued, several members of the SUB11 group went on another trip to The Netherlands and were hosted by Ajax fans during the matches.

During 2007/8 season, the fans maintained their conection strong, and kept on waving the other side's flags, and continued visiting some Ajax and Maccabi's matches.

Both parties keep in touch on a daily basis and hope for a long and successful brotherhood.